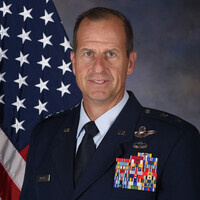 Afghanistan and the 2021 Evacuation of Civilians by the United States Military - The Dr. Edwin Fedder Annual Lecture in Foreign and International Affairs

Maj. Gen. Corey J. Martin, Director of Operations, Headquarters U.S. Transportation Command, Scott Air Force Base, Illinois will join us to talk about the U.S. military's involvement in the evacuation of civilians from Afghanistan earlier this year.

Maj. Gen. Martin is responsible for directing and providing associated policy guidance for the all–domain deployment of forces and the distribution of supplies and equipment for wartime, peacetime and humanitarian operations for the Department of Defense, including joint training, exercises and war planning. In addition, he is responsible for force protection for USTRANSCOM and its components and has operational control of the Defense Courier Service and the Joint Operational Support Airlift Center.

Maj. Gen. Martin was commissioned from the U.S. Air Force Academy in 1991 with a Bachelor of Science in Aeronautical Engineering. He is a command pilot with more than 4,200 hours primarily in mobility aircraft including combat airdrop missions over Afghanistan and Iraq. He has served in staff assignments at the major command, sub–unified command and combatant command levels. He has commanded both an in–garrison Operations Support Squadron as well as a deployed squadron for Operation Iraqi Freedom. The general’s wing commands include the 60th Air Mobility Wing and the 376th Air Expeditionary Wing for Operation Enduring Freedom. Prior to his current assignment, Maj. Gen. Martin served as the Director of Operations, Strategic Deterrence and Nuclear Integration, Headquarters Air Mobility Command, Scott AFB, Ill.