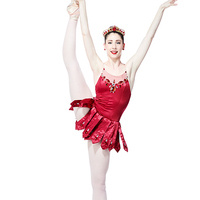 For the very first time, Saint Louis presents one of George Balanchine’s iconic ballets - Rubies. The ruby red costumes and romantic nature of the ballet are well suited to Valentine’s weekend. Performed by major companies throughout the world, Rubies is set to music by Igor Stravinsky and is the “jazziest”, most accessible, and most often performed of Balanchine’s “jewel” ballets. (Saint Louis Ballet’s Artistic Director Gen Horiuchi was a protégé of the famed choreographer, and was selected by Balanchine to join New York City Ballet where he became a principal dancer in the late 1980’s.)

Also featured are two signature works of Chicago’s acclaimed Joffrey Ballet - Reflections and Light Rain by Gerald Arpino. Saint Louis Ballet joins professional ballet companies throughout the world in marking the 10th anniversary of the passing of Arpino and the 30th of Robert Joffrey by presenting masterworks by these American dance innovators. An original work by Gen Horiuchi will complete the program

$59, $53, $43, $34 | UMSL Student and Employee discounts available for this performance. Please visit the Touhill Ticket Office with UMSL ID after the single ticket on sale date for more information and to purchase discounted tickets.