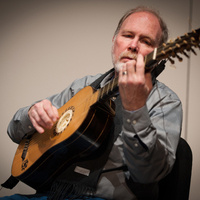 Can We Hear Them Now? Hearing Early Music in the Modern World

Jeffrey Noonan has performed Early Music throughout the Midwest for nearly forty years. He plays music from the sixteenth and seventeenth centuries on instruments from these eras—the lute, the Renaissance and Baroque guitars and the theorbo—as a soloist and with numerous ensembles. Join us as Noonan discusses the revival of these old instruments and the development of the Early Music movement in the last century. He illustrates his talk with recorded and live examples of music by both well-known composers—Bach, Handel, Vivaldi—and lesser known composers—Dowland, de Visee, Merula and Piccinini. The conversation includes demonstrations of old instruments, a discussion of scholarship behind the Early Music movement and a consideration of what Early Music performances offer today’s audiences. Noonan recently created the concert series Early Music @ First and he previews the six concerts on that series. Learn more at jjnoonan.net.