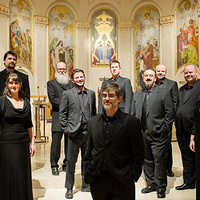 Cappella Romana - Venice in the East - Music from Renaissance Crete

Byzantine musicologist and performer Alexander Lingas directs his ensemble Cappella Romana, renowned for their presentations of music that span the full breadth of the Roman Tradition, from the Greek East to the Latin West. Here Lingas conducts Venice in the East, a program of medieval Byzantine chant and related Latin works influenced by Byzantine Tradition from Crete and the Ionian Islands, which were ruled by the Venetians after the Latin conquest of Constantinople in 1204, and from Cyprus, a Venetian outpost from 1489 to 1571. Commissioned by the Early Music Festival in Utrecht (Netherlands), the largest early music festival in the world.

$20 general public | UMSL Student and Employee discounts available for this performance. Please visit the Touhill Ticket Office with UMSL ID after the single ticket on sale date for more information and to purchase discounted tickets.