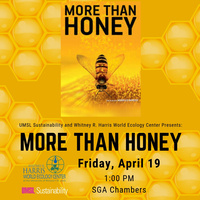 Join us for a free documentary screening about bees! There will be snacks provided for the event. Co-sponsored by Whitney Harris World Ecology Center. We hope to see you there!

Over the past 15 years, numerous colonies of bees have been decimated throughout the world, but the causes of this disaster remain unknown. Depending on the world region, 50% to 90% of all local bees have disappeared, and this epidemic is still spreading from beehive to beehive – all over the planet. Everywhere, the same scenario is repeated: billions of bees leave their hives, never to return. No bodies are found in the immediate surroundings, and no visible predators can be located.

In the US, the latest estimates suggest that a total of 1.5 million (out of 2.4 million total beehives) have disappeared across 27 states. In Germany, according to the national beekeepers association, one fourth of all colonies have been destroyed, with losses reaching up to 80% on some farms. The same phenomenon has been observed in Switzerland, France, Italy, Portugal, Greece, Austria, Poland and England, where this syndrome has been nicknamed “the Mary Celeste Phenomenon”, after a ship whose crew vanished in 1872.

Scientists have found a name for the phenomenon that matches its scale, “colony collapse disorder,” and they have good reason to be worried: 80% of plant species require bees to be pollinated. Without bees, there is no pollinization, and fruits and vegetables could disappear from the face of the Earth. Apis mellifera (the honey bee), which appeared on Earth 60 million years before man and is as indispensable to the economy as it is to man’s survival.

Should we blame pesticides or even medication used to combat them? Maybe look at parasites such as varroa mites? New viruses? Travelling stress? The multiplication of electromagnetic waves disturbing the magnetite nanoparticles found in the bees’ abdomen? So far, it looks like a combination of all these agents has been responsible for the weakening of the bees’ immune defenses.

Fifty years ago, Einstein had already insisted on the symbiotic relationship binding these pollen gatherers to mankind: “If bees were to disappear from the globe,” he predicted, “mankind would only have four years left to live.”