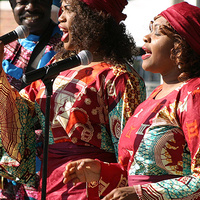 Toby Foyeh was born in London, United Kingdom of Nigerian parents and is based in the United States. He started playing music from an early age in Nigeria paying his dues through school bands in Ibadan and Lagos, as well as while studying in the United States. A band he formed with some high school friends went on to tour America as Hugh Masekela's Ojah band. Although basically a self taught musician, he studied music at Berklee College of Music, Boston and Howard University, Washington DC where he also got a Film Directing Degree.

Three successful CD/Album releases to date include Here I Come in Nigeria, Jalolo 1999/2001 and Lagos Ilu Eko 2006 releases which are available in America, Canada and Europe. He performed extensively on Nigerian Television where his music videos are very popular. With his band, Orchestra Africa, he has performed in the United Kingdom, Europe, United States, Canada ,Japan and Africa. Orchestra Africa's music dubbed as “AFRIJAM Music” arises from old traditional Africa juxtaposed with modern influences - high technology, advanced communications and international travel in a global market. Afrijam is a unique new music created from a fusion of Nigerian music styles – Highlife, Afrobeat and traditional Yoruba music with Rock, Pop, and Jazz.

$20 general public | UMSL Student and Employee discounts available for this performance. Please visit the Touhill Ticket Office with UMSL ID after the single ticket on sale date for more information and to purchase discounted tickets.