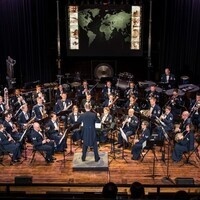 The United States Air Force Band of Mid-America presents a holiday concert at the Touhill Performing Arts Center's Anheuser-Busch Performance Hall. The Band of Mid America represents the professionalism and excellence found every day throughout the United States Air Force. During this concert, you will hear many of your holiday favorites played by groups ranging in size and genre from our smaller quintets to our full jazz band and concert band.